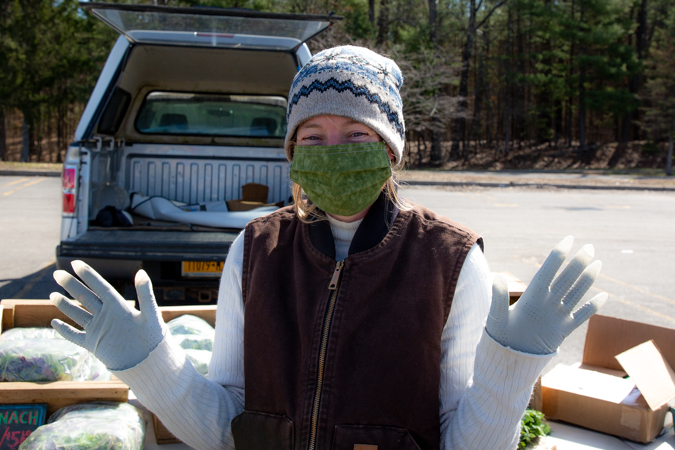 This year has brought an additional challenge: the COVID-19 outbreak.

Mark Bascom and Lindsay Fisk, of Owl Wood Farm, returned to the Saratoga Farmers’ Market last Saturday, a few weeks ahead of schedule. This was due to an early spring rebound in some overwintered spinach and kale, along with the arrival of two summer interns a month early.

“They were supposed to start on May 1, but they were coming from Kentucky and were worried about state borders closing to keep the virus from spreading,” says Fisk.

Fisk and Bascom had not quite finished work on a house they were building for themselves and were living in the mobile home the interns were to occupy. The interns were willing to live in their van.

“But that would be uncomfortable,” Bascom says, “so we doubled down and pushed twice as hard to get into our home sooner than planned.”

The early arrival turned out to be a blessing. Fisk and Bascom had been trying to work out protocols for social distancing between workers and themselves, and with the interns already on site, some of that concern was eased.

Pleasant Valley Farm’s Paul and Sandy Arnold began their winter with a world cruise, which COVID-19 cut short. They arrived home a few weeks ago and self-quarantined to ensure they were virus-free.

But quarantine didn’t mean lying low; the couple’s children, who had been running the farm, invited them to get to work! “We chopped wood, tilled the fields, planted many different vegetable crops, helped organize the computer orders, and did what we could to help with other farm work,” says Sandy Arnold. “We just worked on remote areas of the farm, not production, and did not attend the markets until now.”

Farmers, of course, are not immune to the virus itself. But they are accustomed to working alone and outside. This has helped many farmers gained a new appreciation for what they have and do, as a recent Facebook reflection from Mariaville Mushroom Men’s Bobby Chandler illustrates:

Now, Chandler continued, “This is what I have come to realize: “There is a pandemic wreaking havoc on this country. Many people are out of work and are stuck at home with the children bored out of their minds. While most people are dealing with that, I am here in Mariaville, with my three kids playing outside. We are still producing food while many cannot source the simplest of products. We are farmers, we never stop working. The world needs us now more than ever.”