Carrots, turnips, and beets. These are the everyday root vegetables at the Saratoga Farmers’ Market that we eat year-round. However, at this time of year, as summer harvests hit their peak, they shine. They come to market fresh from our area’s farm fields, often with their stems attached. These stems are not only pretty to look at but are edible, too.

Farmers harvest root vegetables by pulling them from the stem. These stems add nutrition and flavor to summer meals, not to mention value to your market purchases. The leafy greens of beets, turnips, and carrots are all sources of vitamin A, vitamin C, and fiber. Here are a few tips for getting started:

● Carrot tops. Clip off the green feathery tops. Wash them well and rinse them a couple of times to remove excess dirt. Select the greenest and most tender tips of the bunch and add them to soups, stocks, or to vegetables you might be roasting or braising for the night’s meal. They taste somewhat like parsley but add a distinct carrot-y flavor.

● Turnip greens. The leafy greens that top Hakurei and other white summer turnips can make a pleasantly spiced appetizer when cooked by themselves. After removing the greens, wash them well and discard any yellowed or wilted leaves. To cook, chop the greens finely, and heat up a skillet. Add a pinch of salt, pepper, freshly chopped garlic, fennel seed, coriander, cumin and/or fenugreek. Toast the spices for a minute or so, then add the turnip greens. Toss them quickly in the hot pan with tongs or two wooden spoons so that they are mixed into the spices. Once the greens have wilted, serve them with a squeeze of lemon and your favorite beverage.

● Beet greens. These leaves along with their ruby-red stems have a rich flavor that is sometimes even more intense than the beets. After a good wash to remove grit, the younger leaves are delicious steamed or chopped finely for salads. Save the older leaves for stir-fries or saute them with olive oil, garlic, salt and pepper.

Other stems also can yield delicious dishes. Try, for instance, adding the stems of basil, parsley, or cilantro to soups or to stocks. Or save them and use in pesto. 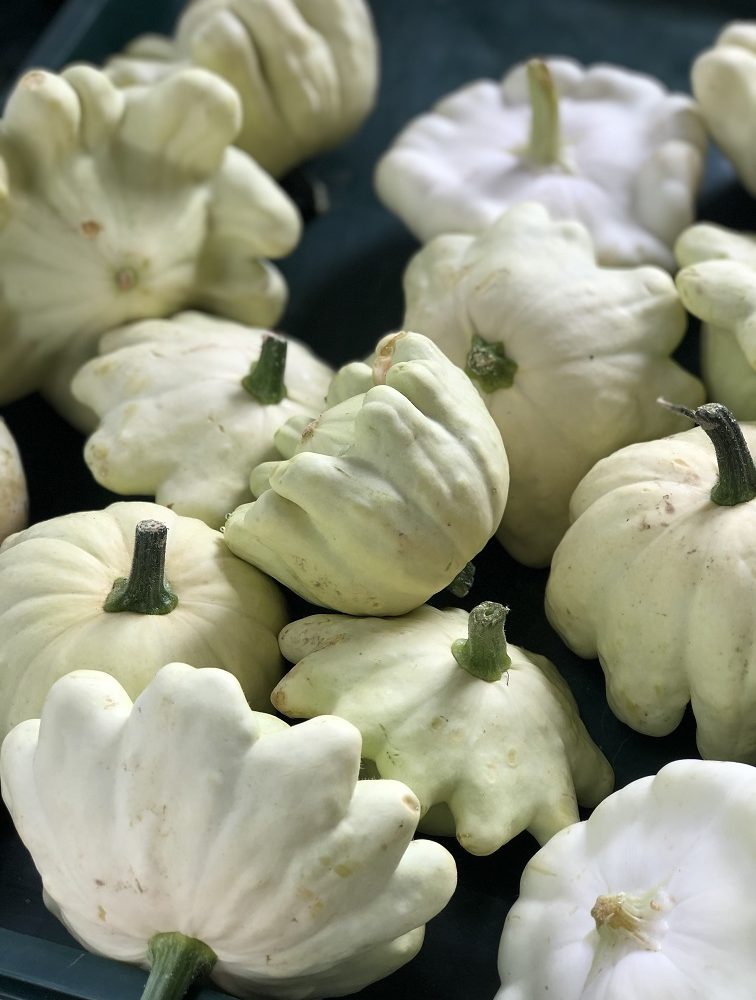 Many regulars treat their trips to the twice-weekly Saratoga Farmers’ Market as opportunities to stock up on provisions for the week.

But going to the market also can be an opportunity to discover something new – an unusual fruit, an heirloom vegetable, a different kind of homemade sauce. To bring out that adventurous spirit, we asked our summer interns, Laura Kenny and Elizabeth Horgan, to explore the market and share their favorite finds. Here’s a short list of what they came up with:

1/ Lovage. Its flavor and smell can be described as a mix of celery and parsley, but with a higher intensity of both of those flavors. This herb is delicious in salads and soups. Find it at Otrembiak Farm.

2/ Lions Mane. This poofy mushroom sold by Mariaville Mushroom Men and Ramble Creek Farm is often equated to a steak or a lobster. Slice it thinly, cook it in a hot, unoiled saucepan for 3-4 minutes. Then add oil and seasonings of your choice. Turn off the heat and let it rest. It will taste a little like steak or lobster.

3/ Garlic Scapes. These green curlicues are the flower of the garlic. Farmers cut them off to help their garlic grow and invite you to enjoy them as a vegetable or meat seasoning, atop pizzas, in pasta sauces, pickled, or stir-fried.

4/ Celtuce. This Asian green is harvested usually in late summer for its stem. Its young leaves, however, also are delicious in a quick stir fry with oil, red pepper, and peanuts. Find the leaves at Squashville Farm.

5/ Salsa Gardens. If all the fresh food makes you want to grow your own, check out the salsa and pizza “gardens” that Balet and Burger nurseries offer. All you need in a single pot.

6/ Kettle Corn. The Proper Popper turns this fair-like treat into a weekly market affair. Find them Saturdays with the other prepared food vendors.

8/ Scallop squash. We often think of patty pan squash as small and yellow. But it can be big and multi-colored, as many vendor stalls attest. Small to medium scallop squash can be treated like zucchini. The skin is thin and the seeds are small enough you can slice and cook however you would like. You can pickle, saute, grill, or even bake this squash. Larger pattypan squash needs a little extra TLC, but they are the ultimate vessel for stuffing and baking.

9/ Spatzle. The Vermont Spatzle Co. offers a gluten-free version of this German specialty on Saturdays. Ask them for their list of recipes.

10/ And for that newborn, check out the hand-painted onesies at the Feathered Antler.

Of course, the interns made many more discoveries. We invite you to join them and explore. 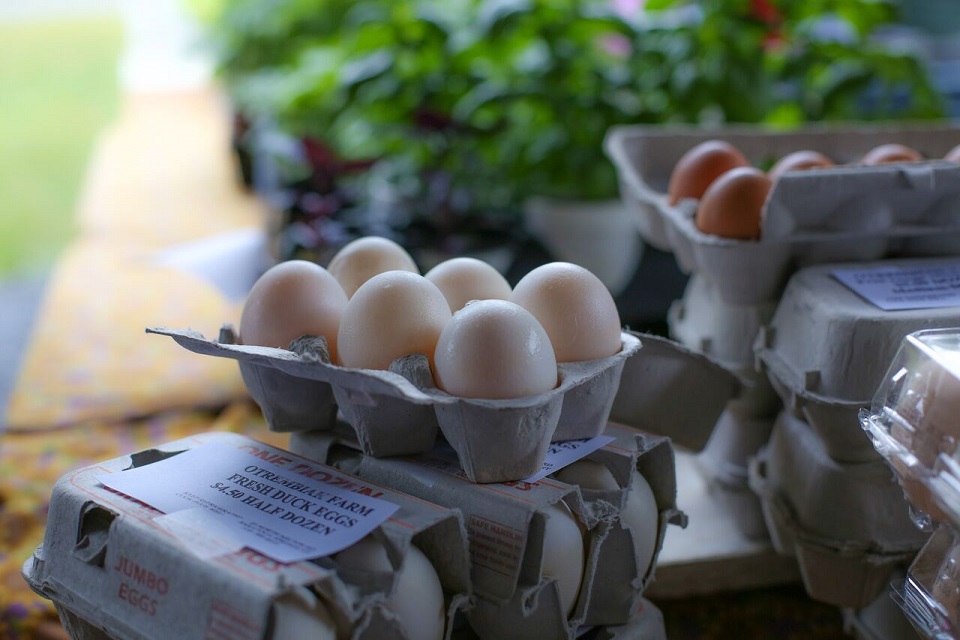 When shopping for produce or meat in supermarkets, there’s often no information about the origin of those products or how they were raised. At Saratoga Farmers’ Market, customers can easily get the “where and how” from our farmers.

One exception in grocery stores is the overwhelming amount of information on egg cartons. Some information is based on USDA definitions; some is advertising. Farm locations are often on the back of the cartons.

According to USDA, farms can raise egg-laying hens in various ways. If a carton states nothing, this probably means the hens are in “battery cages,” 67-76 square inches per hen, smaller than a standard sheet of paper.

Other housing methods are cage-free, free-range, and pastured. “Cage-free” hens live indoors, with no requirement for the amount of space for each hen. “Free-range” hens have access to the outdoors, but that area may be very small and covered with concrete.

Although USDA hasn’t defined “pasture-raised,” pasture for hens should contain young grass and plants in addition to standard feed. Hens will also catch earthworms and insects. Research done by Mother Earth News and Penn State University concludes that these eggs are higher in Vitamins A, E, and D, and Omega-3 fatty acids, and lower in saturated fat and cholesterol.

Cartons labeled pastured eggs in winter should come from states where grass grows year round such as Texas, California, Georgia, Arkansas. In the Northeast, there is no pasture once the snow falls, until spring comes.

“No Hormones” on cartons means nothing because the Federal government
doesn’t allow hens to receive hormones. “No Antibiotics” means farms add none to the hens’ feed or water.

For eggs to be labeled ‘local’, the 2008 Farm Bill requires flocks to be less than 400 miles from processing, or within the state where eggs are laid and processed. Those eggs may be shipped anywhere in the U.S. By contrast, eggs at our Market come from farms less than 30 miles away. 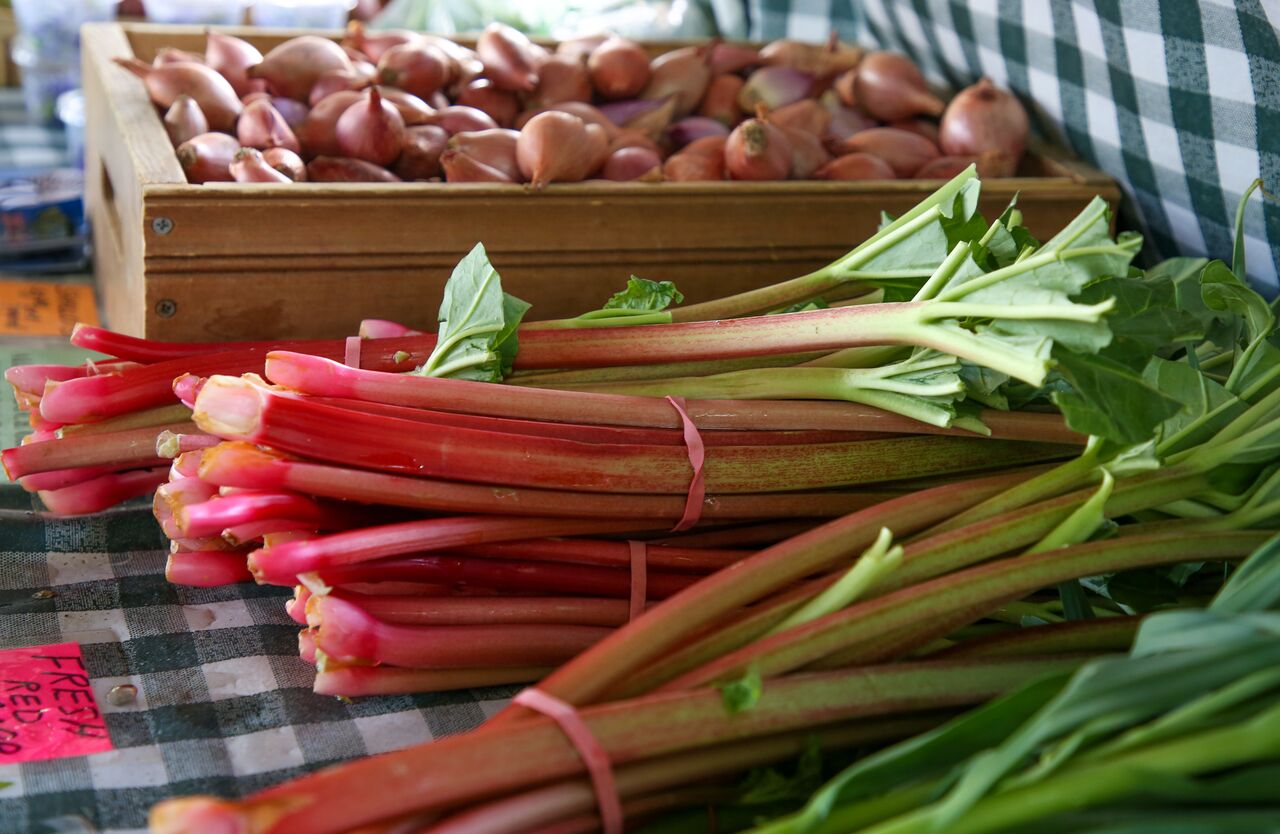 As a child, Pattie Garrett did what so many youngsters do to this day. She marked the spots in her neighborhood where rhubarb grew. She’d zoom in, break off a stalk and eat it raw. Neighbors didn’t mind because when rhubarb was in season it grew quite fast. In the child’s mouth, the reddish outer stem blended with the green interior to create a sweet-tart treat, reminiscent of an apple, celery, strawberry, or something in between.

These days, Garrett finds her rhubarb on Wednesdays and Saturday at the Saratoga Farmers’ Market, where it is in full season now. It’s also available for purchase as a starter plant from the Otrembiak Farm.

Rhubarb is a perennial, which means it requires a year for its roots to get established, and three years for the plant to flourish. Farmers harvest from May through July.

One joy of a perennial patch is the story of its growth. As Paul Arnold of Pleasant Valley Farm recounts, “We had rhubarb from 1989 to 2016. We originally planted our plants in a large dose of composted sheep manure. Nutrients were good and they did well.”

The plants grow wider over time, and the stems get thinner. As a result, farmers generally dig up the roots every three or four years and split them, into eight-inch squares.

“We would split them into four equal pieces, leaving one in the ground and either expanding the patch or selling off the extra three pieces,” Arnold says. “We split them with a spade while they were dormant in the early spring. The root is one big mass so there is no guesswork.”

By 2016, Pleasant Valley’s patch held 72 plants. But the plants were becoming less productive and were in the way of a washing station expansion. So, Arnold notes, “we eliminated it, and this spring we purchased new plants.”

My own love for rhubarb, unlike Garrett’s, developed later in life when my husband and I inherited a patch that had been started in the 1990s in our backyard. It continues to produce and as we started farming, we began the second patch.