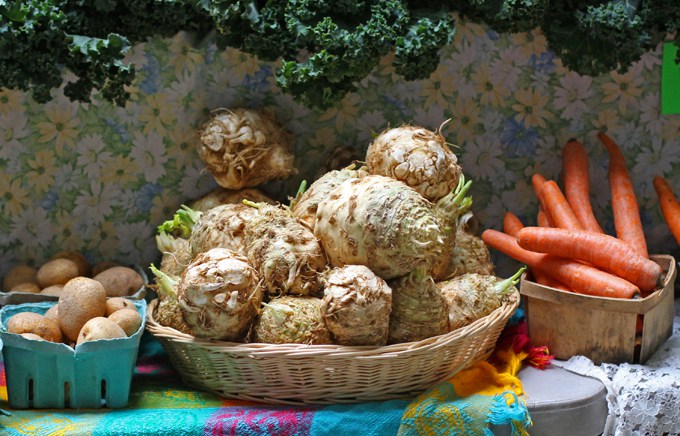 Saratoga winters are harsh. It’s cold. The snow keeps coming. We can play in the fresh drifts and warm ourselves by the fire. But ultimately the taste buds start crying for something crunchy, tangy, and fresh.

This beige, knobby root vegetable typically makes its appearance at the Saratoga Farmers’ Market just before Christmas. Currently, it is available from Gomez VeggieVille, whose members swear by the root. According to Valentina Gomez, it is celery with oomph. Her husband recommends peeling the outer surface, slicing into it thinly, and eating it as is or in a salad. She suggests steaming it, sautéing it, roasting it, or letting it steep into a root vegetable gratin or stew.

Over the years, I have bought celeriac from the Gomez’s and others. I have treated it more like an ingredient to add to a dish, rather than a dish in and of itself. It tasted to me like celery and maybe licorice. A little went a long way.

Then, Pattie Garrett, market photographer and author of the My Saratoga Kitchen Table food blog,

Market director Julia Howard also got on the celeriac beat.

“I always saw it at the market but rarely tried it,” says Howard. “I think mainly because I wasn’t sure how to prepare it.”

Howard’s mother, who is from Germany where celeriac is common, suggested that she try it. Howard peeled a root and steamed it. “I ate it with a little bit of salt. It was really good. It was fresh and crisp like an apple, but when cooked was tender like steamed broccoli or cauliflower. It has a hint of sweetness.”

Garrett, Howard, and Gomez have emboldened me to experiment with celeriac. I have steamed it, roasted it, chopped it into salads, and eaten it as I like to eat celery – with peanut butter.

Celeriac has proved its worth. Its flavor reminds me of seasons past and of the spring to come. It is crisp, tangy, and good.