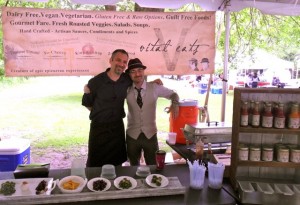 With the arrival of summer, you may be thinking about lifestyle changes: maybe committing to a new workout routine, or saying “Yes!” to the diet plan your friend is always talking about. A new Saturday vendor at the Saratoga Farmers’ Market, Vital Eats, aims to help you along the path toward better health with its ready-to-eat foods, seasonings, and sauces.

Vital Eats began one year ago when cousins Jude Goldman and Reuben Schwartz began creating recipes and dishes that customers could trust to be both healthy and delicious. Their products include hand-crafted artisan sauces, condiments, spices and gourmet take-out dishes that are vegan, vegetarian, and dairy-free, with some gluten-free and raw food options as well.

Vital Eats can be found every Saturday at the market, under the large white tent just north of the market pavilions. Later this summer, the business plans to have products also available for wholesale purchase.

Goldman and Schwartz claim they always knew they wanted to have a business together. Goldman had already helped develop Puckers Gourmet and was working at other local markets. Now he is at his fourth market as Vital Eats.

Goldman says he was, “…looking for a challenge. Anyone can make a steak. It is much harder to limit yourself with the ingredients you use.”

Many people think that changing your diet consists of saying good-bye to your favorite comfort foods and turning down recipes that make your mouth water. But, Vital Eats has even found a way to make a delicious dish—Easy Mac n Cheezy—that will satisfy your cravings for macaroni and cheese, without using dairy products. 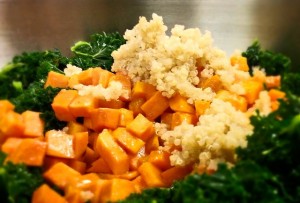 Unlike prepared foods you would find at the grocery store, the business partners put a great deal of effort into making sure that all their ingredients are fresh, meet dietary standards, and are locally sourced. Recipes are created in a local Saratoga County kitchen and then served fresh to the Saratoga Farmers’ Market shoppers.

One of Vital Eats’ top-selling dishes is Umami Kale with Quinoa and Roasted Yam. (Umami is a Japanese word describing a “pleasant savory taste” and it is considered to be one of five taste components, along with sweet, sour, bitter, and salty.)

The sign at Vital Eats’ market table describes the dish as, “Savory umami-drenched kale with the nutty earthiness of quinoa, finished with a sweet kick of lightly roasted yam.” The Umami Kale can be purchased for take-out at the market or made at home by following this recipe.

*Items can be purchased at Saratoga Farmers’ Market

Wash and de-stem kale. Blanch in boiling water for two minutes, place in cold water and ice bath to cool briefly, strain, and set aside.

Dice the yam and drizzle the olive oil over it, and roast at 400 degrees for 15 minutes, until soft and golden.

Rinse the quinoa in a strainer. Prepare the quinoa by simmering in 1 cup of water for 15 minutes or until it splits and is soft. Strain and set aside.

Add 1 1/2 Cup of Vital Eats Tsunami Umami Sauce. Mix in yam and quinoa, and then serve warm or cold.