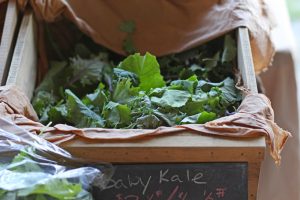 Admittedly, kale jokes abound. But that’s only because this green leafy vegetable – once primarily the domain of fancy plate garnishes – has evolved into a farmers’ market staple year round.

Shannon Cowan describes kale in a blog piece for Earth Easy (a website devoted to sustainable living) as the “workhorse of your winter garden” and urges year-round gardeners to keep the crop going for its beauty, its flavor, and nutritional content.

While I would like to say that I follow Cowan’s advice, I have to admit that my own garden’s kale usually loses at least its beauty and flavor by late December. After repeated hard frosts, snowstorms, and freezing rains followed by thaws, my own kale starts to look rather limp and spindly. It retains a semblance of its freshest in-season flavor, but is not, quite frankly, what it was in October. I am happy at this point to acquire my weekly stash of kale from the produce vendors at the Saratoga Farmers’ Market. This experience also gives me the chance of sampling many different varieties of kale, ranging from curly to winterbor, to purple to red.

A couple of weeks ago, I spotted a particularly striking bunch of kale. The leaves were grayish green but flecked admirably with thin veins of purple. The kale, at the Gomez Veggie Ville stall at the market, is known as “coral”. The Gomez family started the crop in early fall for its late fall and early winter markets. It is now keeping the plants growing and harvesting fresh from their greenhouses in the most brutal months of January.

Coral was crisp, thick, and tasty – full of the kind of fresh succulence that my taste buds seemed to be craving after the holiday months of rich sauces, big meats, and bottles of wine. The stems were stock and thick, and might serve as a potential addition to a meat stock or vegetable broth down the line. The leaves, however, were kale through and through, though they did seem heartier than the spring, summer, and fall selections. I found that they took a little more time to cook, maybe three or four minutes more.

Searches of the Internet did not give me a seed variety for “coral kale.” Instead, I found that it was listed as an ornamental and not generally eaten. This kale, however, tasted quite lovely. Try using my classic preparation: thinly sliced garlic sautéed in oil, the kale washed in cold water and steamed for about five minutes before being tossed into the garlic and oil with a sprinkling of black pepper on top.