At Zehr and Sons’ Mushroom Farm in Ghent, exquisite shiitake and oyster mushrooms grow year-round inside the 40’ x 60’ barn.

“We control the temperature of our barn to be between 65 and 72 degrees, and we also make sure the moisture level is just right,” notes Jeremy Zehr, who lives on the farm with his wife, Doreen, and their young children.

The Zehrs moved to Columbia County from Pennsylvania several years ago, and originally were baking items for the Hudson Farmers’ Market. Seeking to expand their business, they asked the market about what other products were needed.  “Mushrooms!” was the resounding answer. 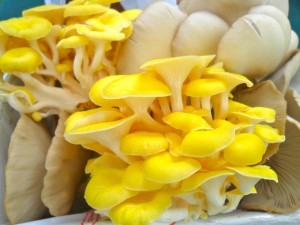 After considering the mushroom opportunity, the Zehrs traveled to a grower who became a mentor and helped them start out. Using Jeremy Zehr’s carpentry skills, the Zehrs built their climate-controlled barn six years ago, and have been growing their business ever since.

The oyster mushrooms are grown in “logs” the Zehrs make themselves. Shredded straw is first put in boiling water, then spread on tables where the mushroom spawn is added. The final step is stuffing the straw into special bags and hanging the bags in the barn. Over 21-28 days, the mushrooms emerge through the slits in the bags.

The shiitake mushroom logs are purchased with the mycelium already grown through the block, so they are ready for harvest more quickly, within 7 to 10 days. Once harvested, the blocks or logs are composted, returning the growing materials to the earth.

The shiitake mushrooms have a stronger, more pronounced flavor, and are the sturdier of the two. The oyster mushrooms, available in yellow or grey,  have more delicate flesh and a mild flavor.

“An easy way to prepare these mushrooms and enjoy their flavor is to melt some butter in a skillet and add the sliced or chunked mushrooms, some garlic or onion,  and a bit of sea salt. They are also good in omelets and burritos, as well as in soups,” says Jeremy Zehr.

The farm sells at Saratoga Farmers’ Market year-round on Saturdays, as well as other markets in the Hudson Valley and western Massachusetts. In Saratoga Springs, the mushrooms are featured on the menus at Mouzon House and One Caroline Street Bistro.

In separate pan, bring chicken stock to boil and add carrots and potatoes. Reduce heat and simmer until vegetables are soft.

Add herbs, salt and pepper. Stir together and simmer until thick.